On the 4th of May, all eyes will be on Levenshulme as we elect a new MP to replace the much-loved Gerald Kaufman. But there will be another important election that day that could possibly have more day-to-day impact on our neighbourhood – the election of a Greater Manchester ‘metro mayor’.

The new mayor will cover all 10 boroughs of Greater Manchester and have powers over transport, policing and some aspects of planning too. He or she will play an important role in relation to devolution and will become something of a figurehead for our city – much like Boris Johnson or Sadiq Khan have done for London.

But one of the crucial reasons for us having a new metro mayor is to make us feel closer to democratic decision-making. It is easy to be cynical – so how do we do this?

For some time now, around 20 groups and organisations from all over Greater Manchester have been meeting to plan a special GM Citizen’s Assembly. The plans is that over 1500 people will pack out the Lowry Theatre on Bank Holiday Monday 1st May and together we will tell all of the possible mayoral candidates about some of the big issues we are concerned about and demand that if they are elected they will do something about them.

It’s a strategy that has worked very well in London and has led to the introduction of the London Living Wage which has benefited thousands and thousands of low-waged people living in the capital city.

In Greater Manchester we are going to lobby the mayoral candidates on 4 big issues: cuts to social care; homelessness; hate crime; and the Living Wage.

The Assembly won’t be boring! We understand it will be a bank holiday but we want people to make the most of the day. There will be music, drama, comedy, plays, powerful testimonies and of course hearing from the candidates themselves. We will be joined by the mayoral candidates, other surprise guests and Sir Peter Fahy. We want people to bring families and children. This is for ordinary families and people across our community.

If you’d like to come along you need to sign up. You can do so online by clicking here. Or alternatively you can join the coach that is leaving from Inspire at 12.45pm. The event is free but you need to buy a coach ticket in advance – £5 for waged people; £2.50 for unwaged.

If you want to find out more then don’t hesitate to contact me. 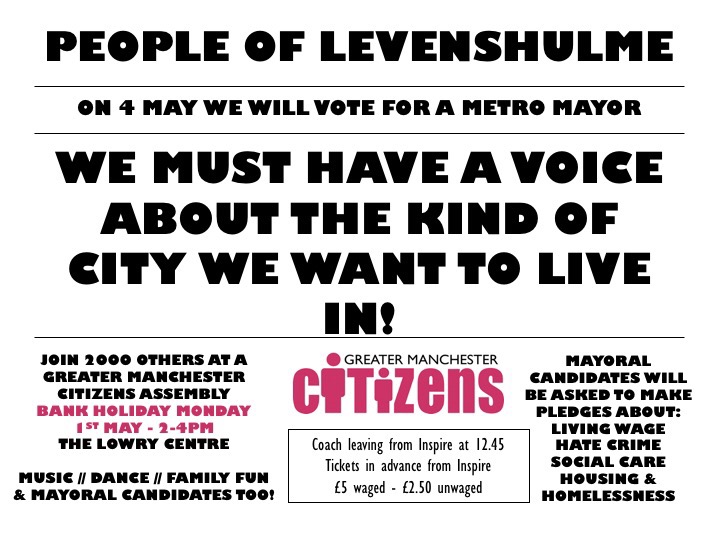