Malcolm Cowen has died. Our condolences and sympathy go to his wife Beryl and his family.

Malcolm had been Levenshulme Community Association Treasurer for some years and was well known through his other community activities, in particular his talents as an actor and dramatist working with Levenshulme Players and AllFM. Malcolm was a knowledgable man with a quick mind and a wonderful sense of humour. He was well travelled and always interested in other people, cultures and histories. His warmth and wit were always evident.

An article honouring Malcolm in the Manchester Evening News is available HERE.

2pm at Levenshulme Baptist Church, Elmsworth Avenue, Levenshulme, Manchester, M19 3NS. There will be tea and coffee served after the service for people not going onto the crematorium.

At this event there will be an open mike opportunity to talk about your memories of Malcolm (funny as well as serious) and there will also be some entertainment as requsted by Malcolm. There will also be a group of our African friends dancing for him. It wll be the send off he wanted so lets make it a day to remember so NO SADNESS, NO BLACK CLOTHES, NO TIES, NO SUITS (although scruffy jumpers are a must – especially with a pen hanging from the neck) and if you have sandals wear them and we will drink his health in tea. ( a bar is also available ).

The roads are not great for parking in Levenshulme and we need to ensure there is room for the Family and the hearse (a big white camper van) to park so please do not park at the Baptist church.

The best place to park is at St Marys Church which has its own car park; you will then have to walk to the service at the church. (You can try the side streets around the church but you have been warned).

If you are only coming for the funeral service then you can park across the road at the Sidings pub, Broom Lane, Manchester M19 2UB. 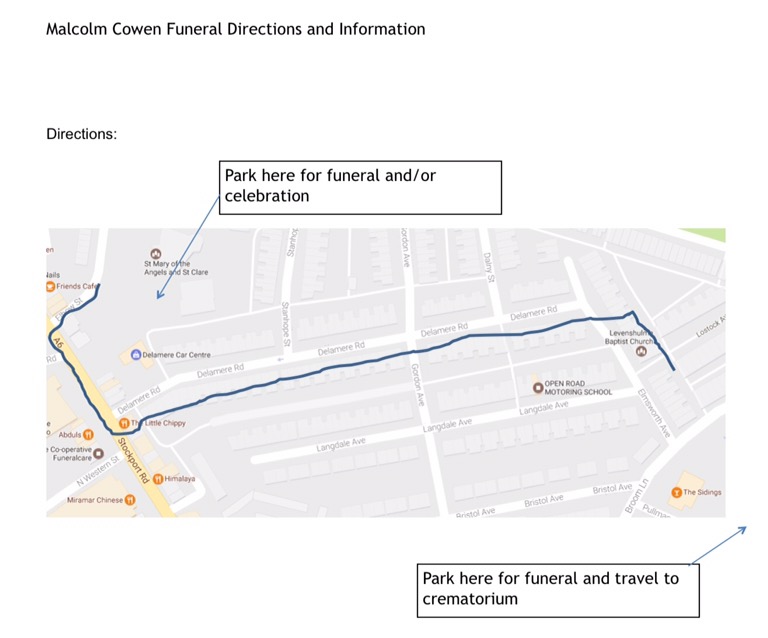 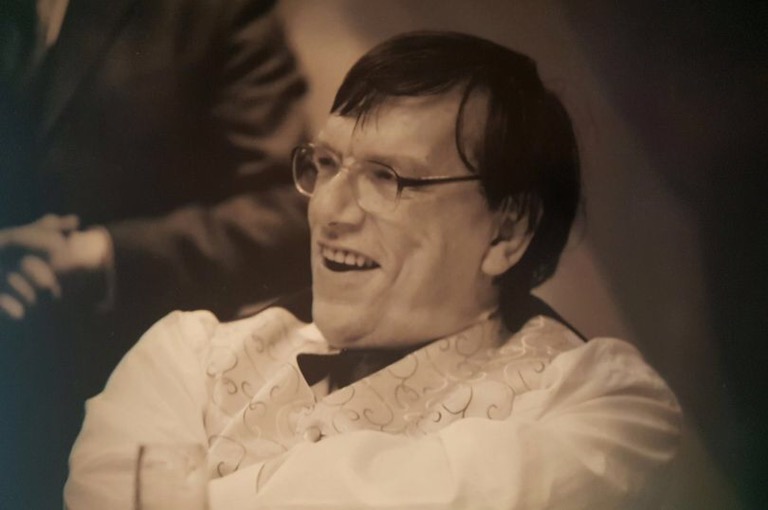 This is a post from the Facebook page of Shebby Gujjar Khan at Zeeshan & Co. Certified Accountants in Levenshulme. The tags haven’t transferred from Facebook but the message is still clear.

“Following the recent deaths and media news on the deaths in the city centre, i decided to make what little change i could myself.

I set about posting on facebook if people wanted to donate good quality clothing or accessories to help keep the homeless warm in these freezing cold weathers. The fact that i am within a 5 mile radius, was not sitting well with me.

I am a young british muslim, born and bred in Manchester. As a Muslim first and foremost, giving welfare to the poor and needy is one of our five pillars of Islam. The main stream media don’t show you the work and contribution of muslims throughout the U.K, so i will therefore use my own facebook platform to spread peace, love and togetherness.

No matter what race or religion a person is, it is our duty for the sake of mankind to help one another, when in need.

We set up 3 drop off points in Levenshulme, Zeeshan & Co Certified Accountants, GFones; Hamza Newton and Tyreworx Amer Ak Imran Akhtar, where people dropped off clothes or we went to collect.

We went out into Manchester City Centre on Saturday night, to distribute warm items of clothing and blankets and hot food courtesy of Al Latif. An inspirational brother who is doing a great job, feeding the homeless at nights. Another brother who has been a great inspiration is Bax Martin as well as my father Rasib Khan Accountants, a leader and the best of role models.

Great job by Hassan Sohail, Jibby Hussain, Adam Murtaza who were a great support with distributing the clothes. Natalie Sadik did a great collection of clothes. Thank you Nattie Lewin.

Life is all about trying to do good and inspire others around you.

We take so much for granted in this life in the luxuries of our own homes. 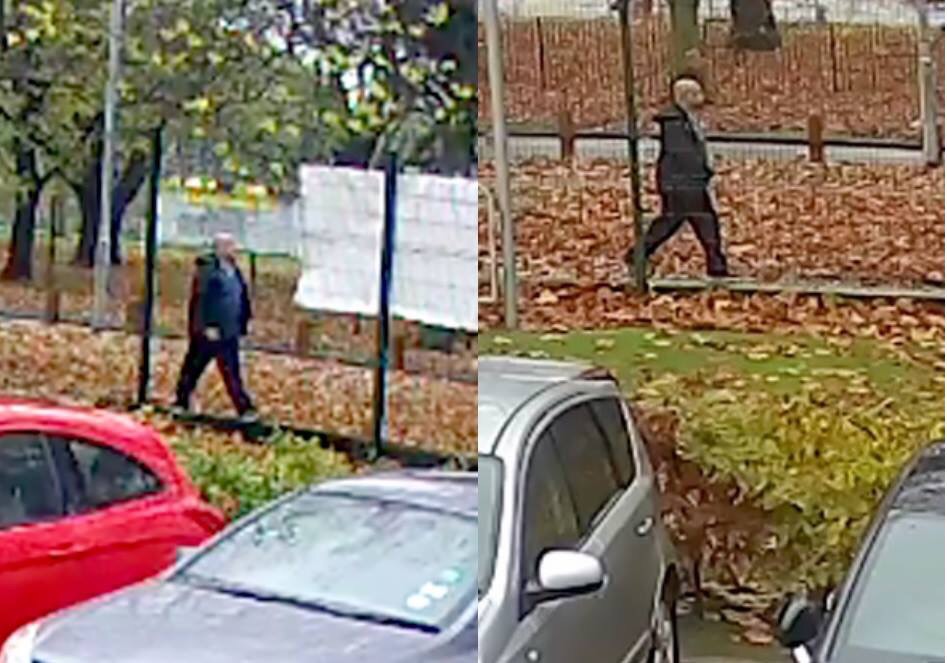 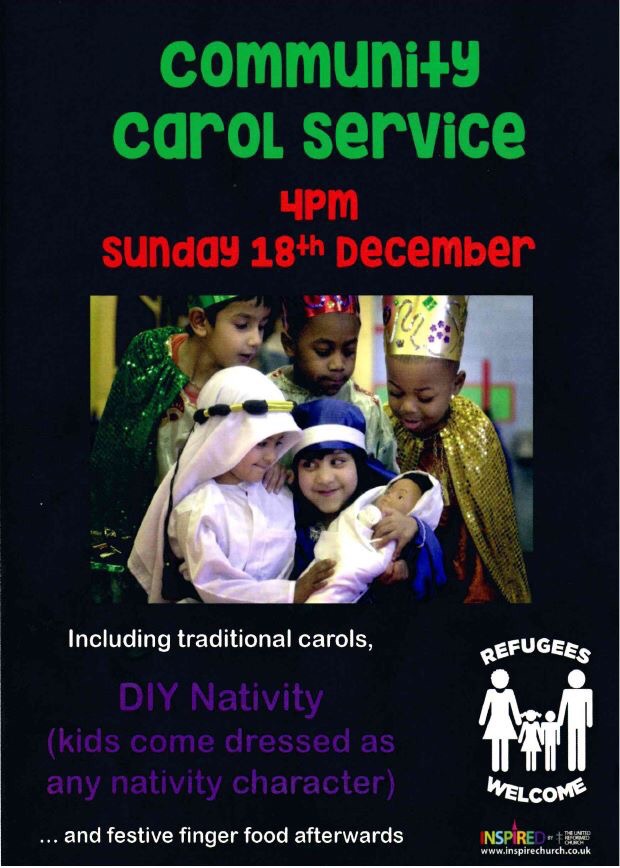 Its TODAY, the first Winter Fair at The Beehive set in Cringle Park, Levenshulme! 11am-3pm. 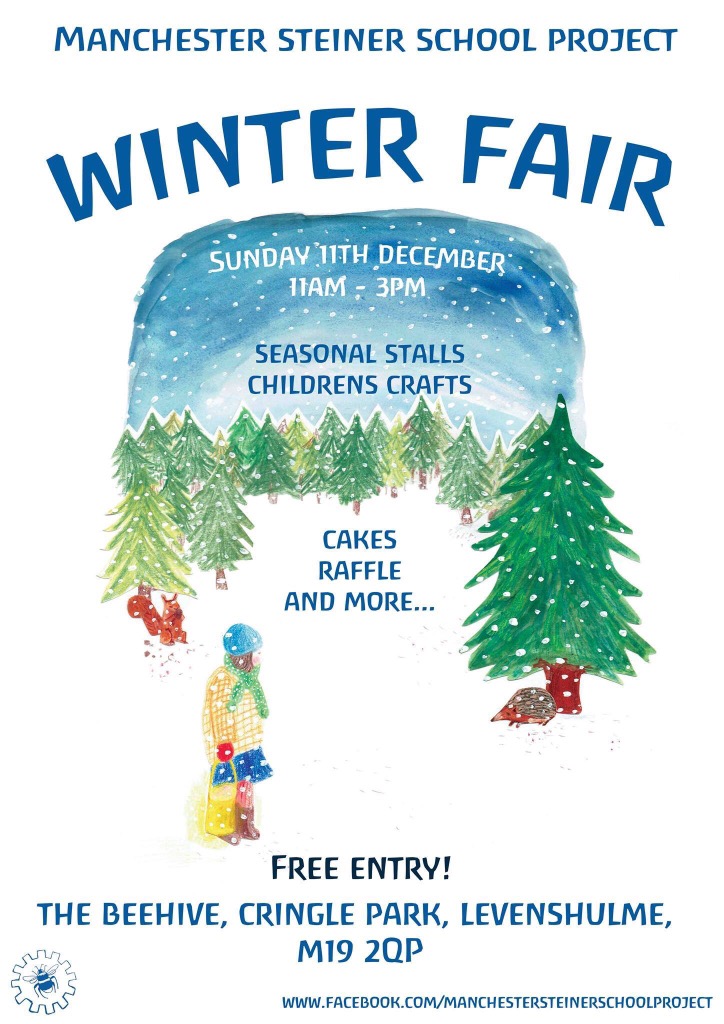