A spontaneous vigil for the victims of the terrorist attacks in Paris was held in Levenshulme tonight (Saturday 14th November 2015).

The sentiment of solidarity was clear with the people of Paris. Levenshulme people are determined to defend our diverse and strong community against any attacks on an open, multicultural inclusive community with a successful spirit of tolerance and respect for all.

Organised via the local Levy Massive Facebook group the event was a touching reminder of the solidarity of ordinary people with the victims of terrorism and extremism. Small gestures demonstrate that people of all backgrounds, beliefs, people who are religious or not, share a common revulsion for intolerance, hatred, extremism and violence. 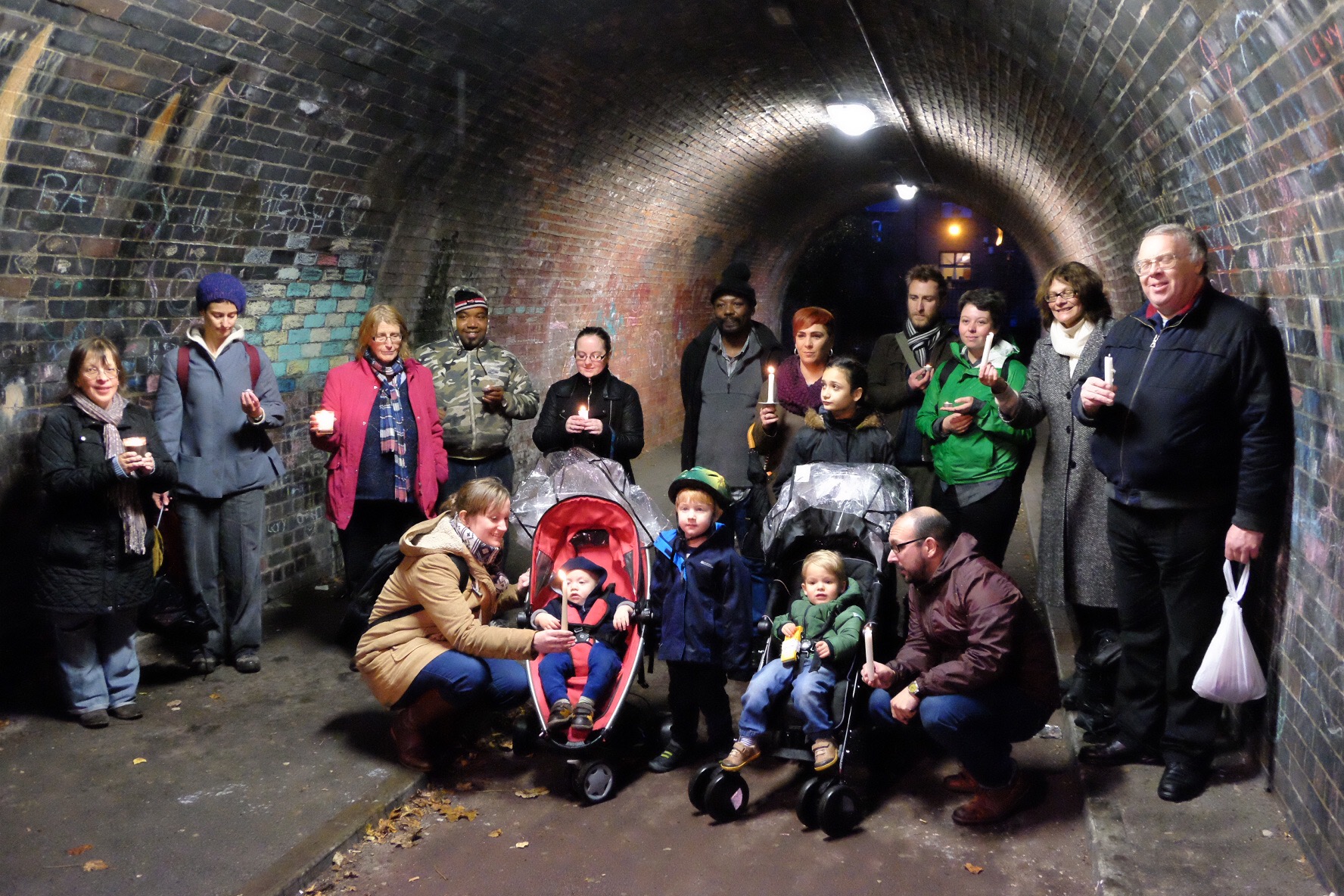 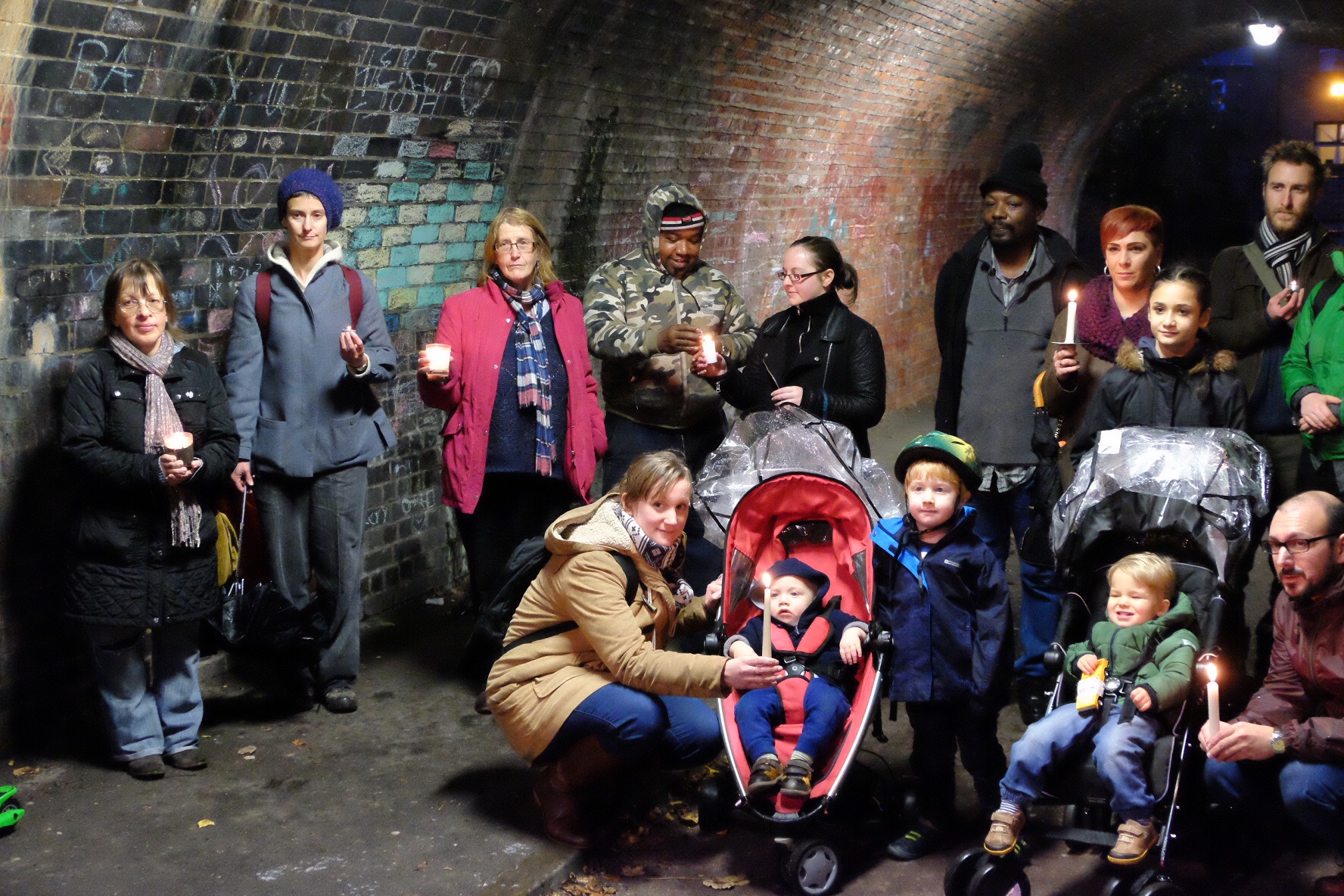 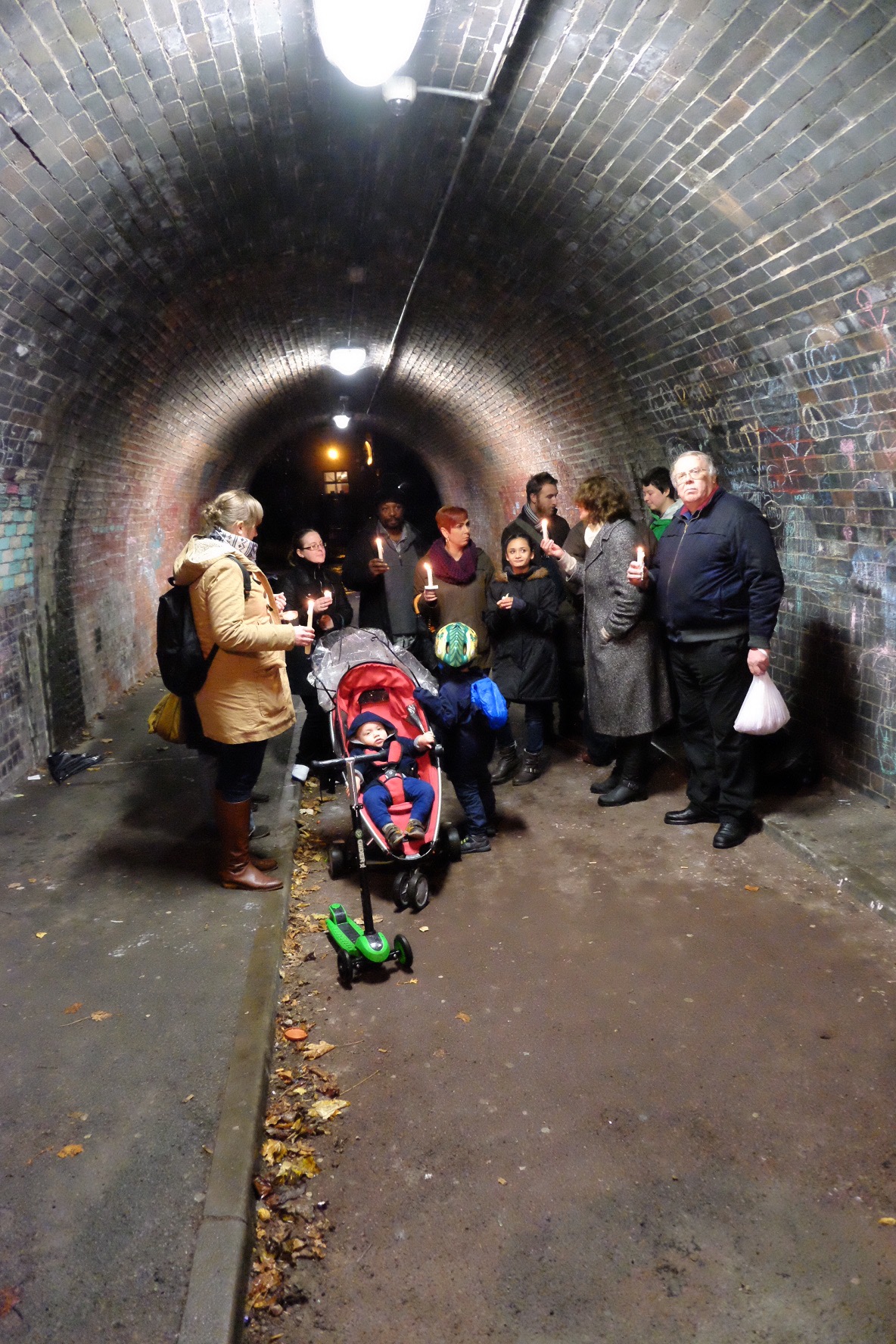 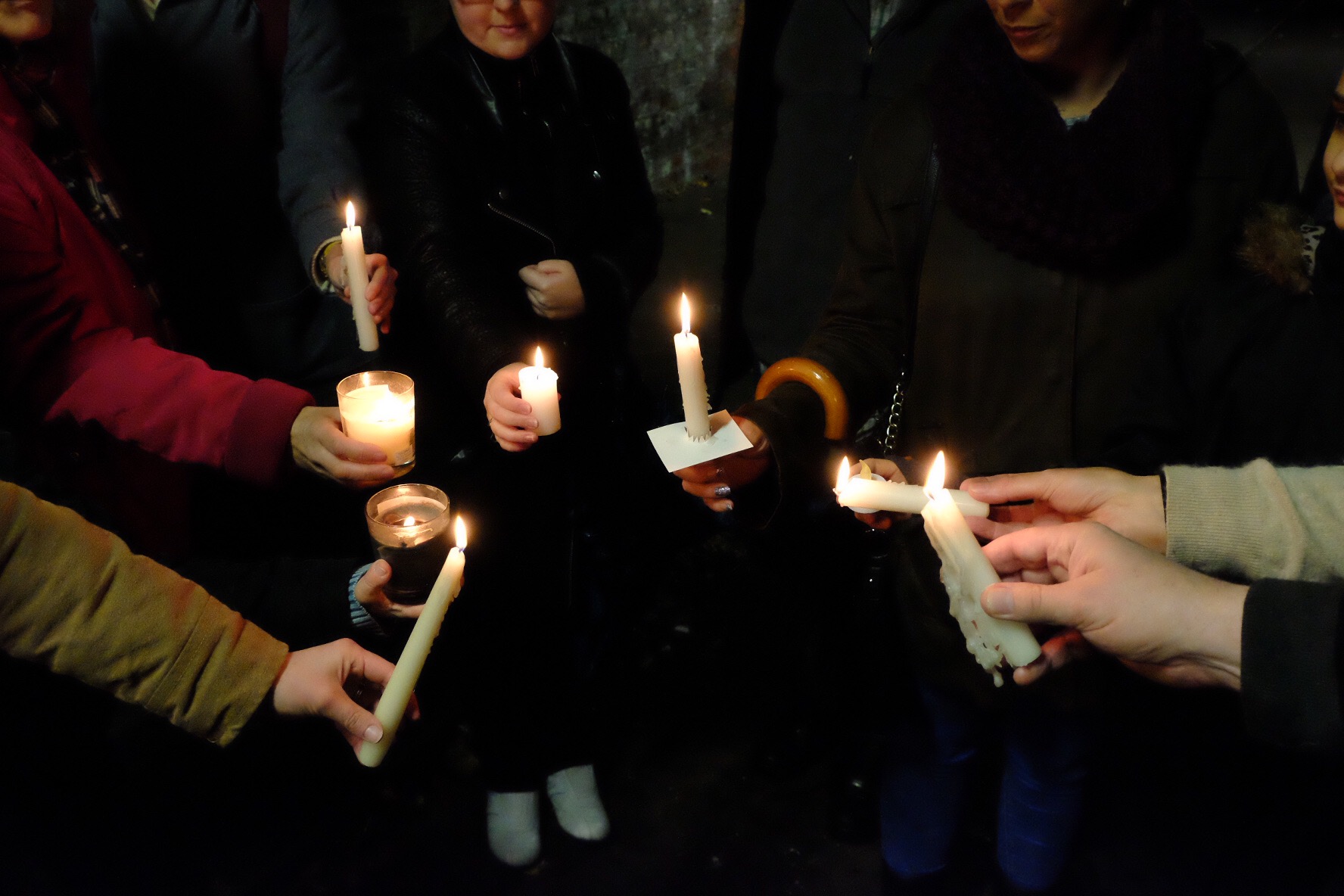 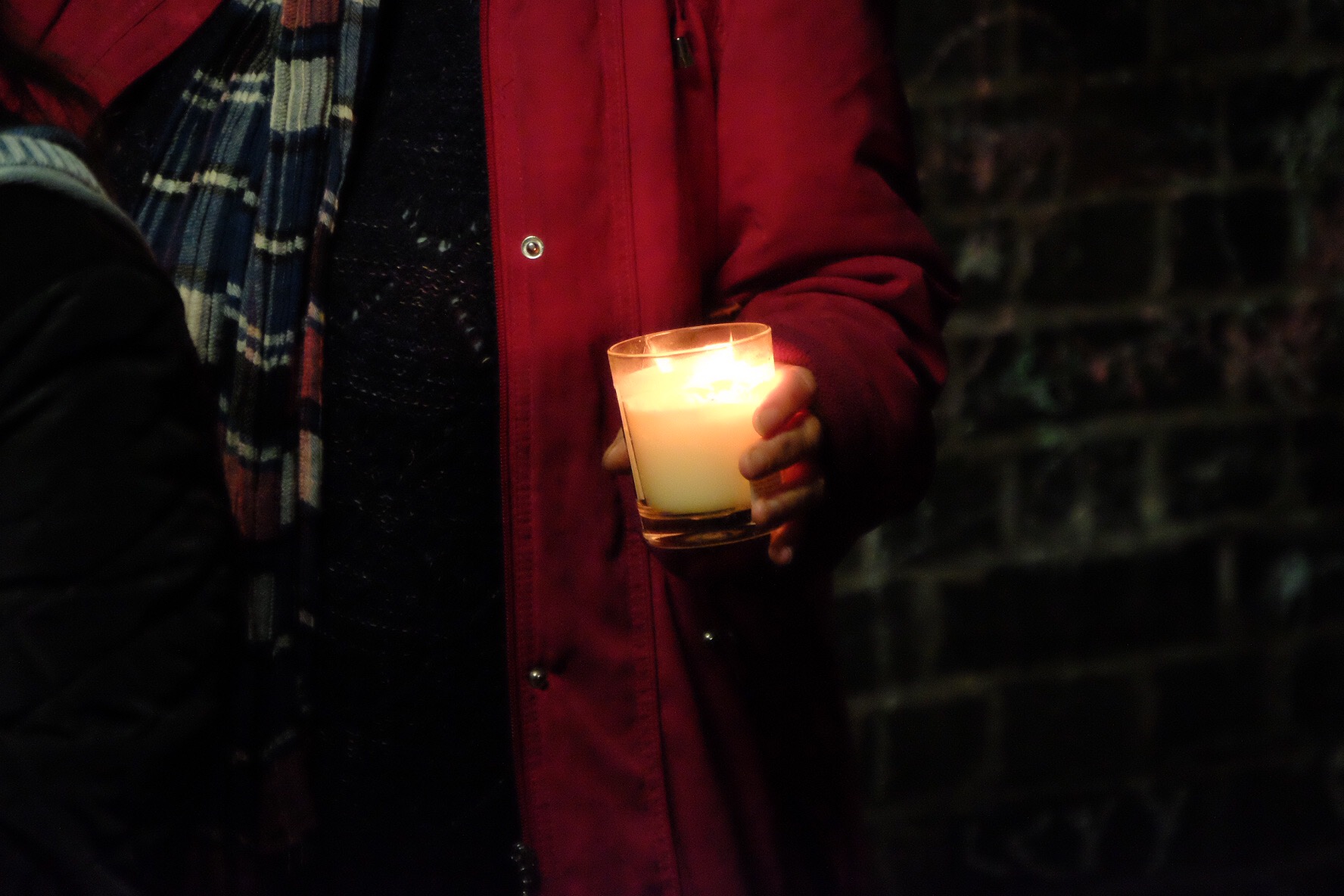 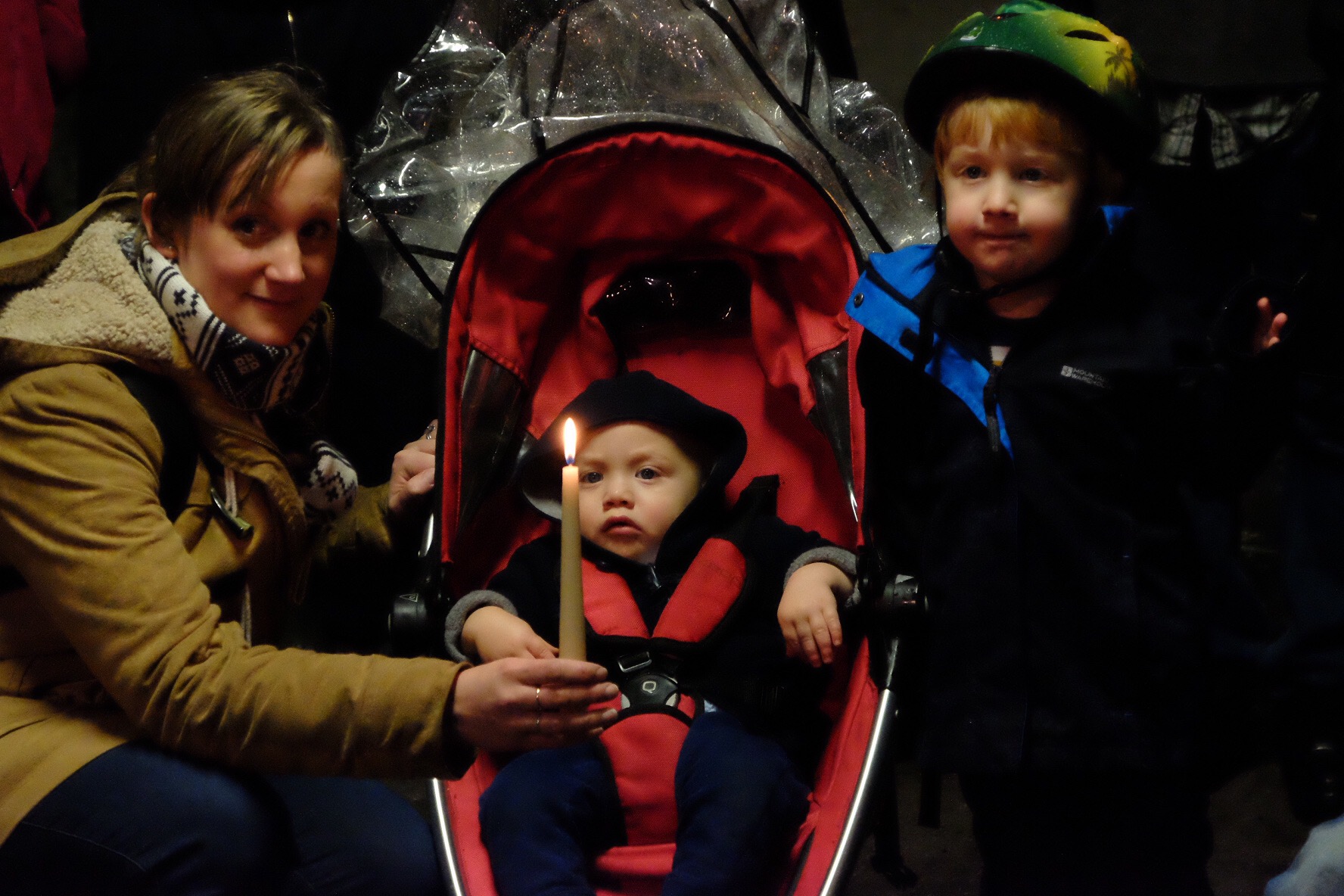 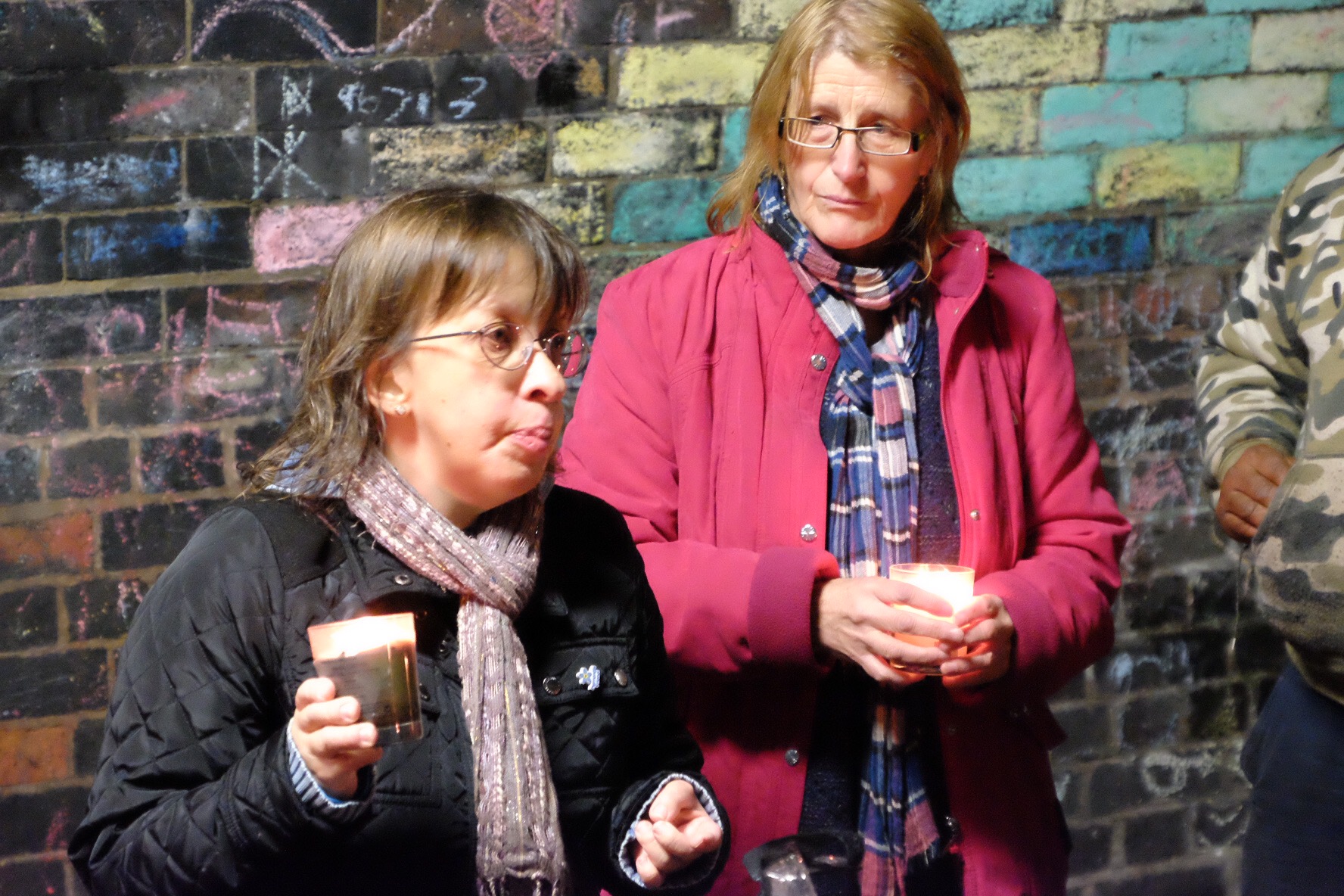 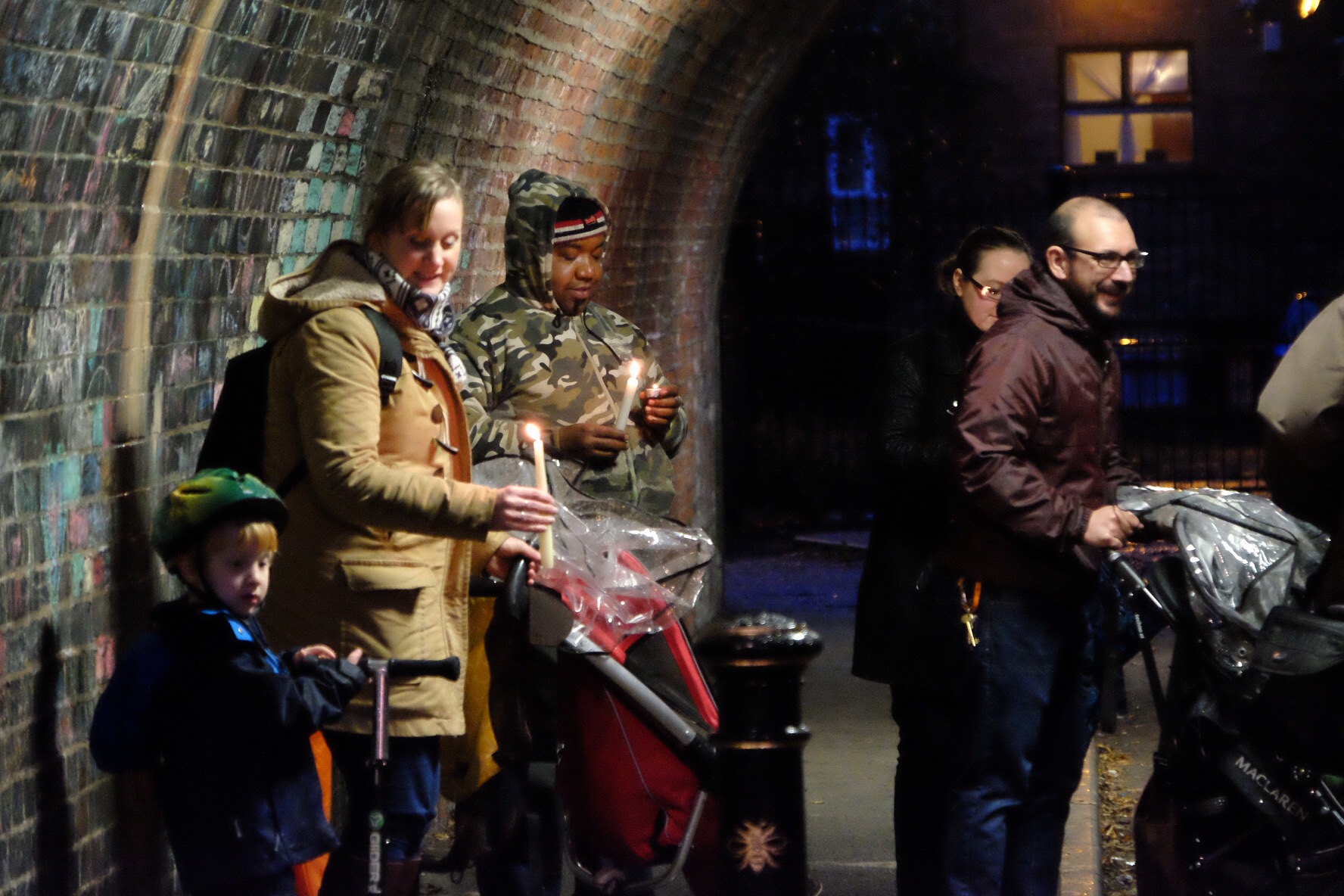 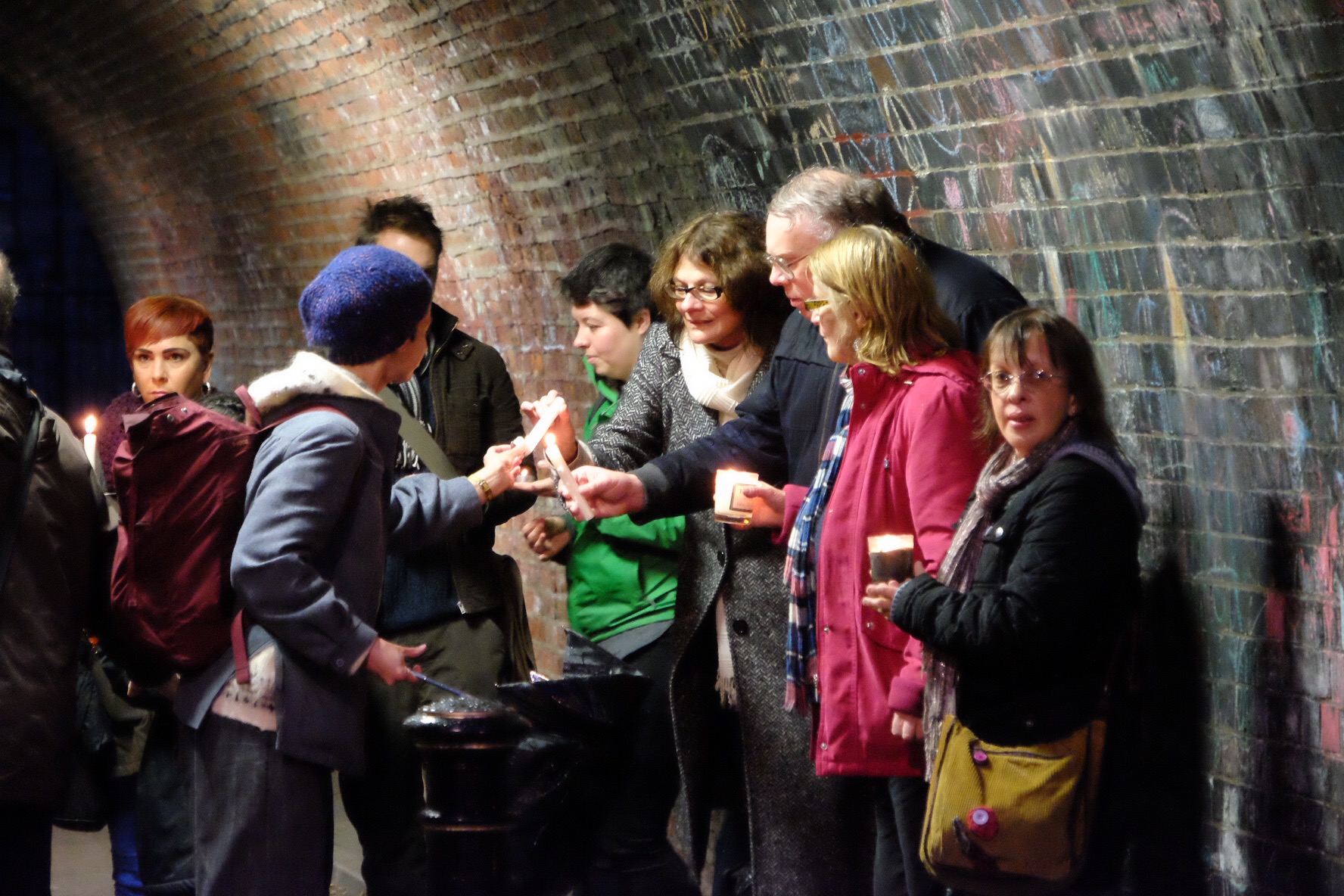 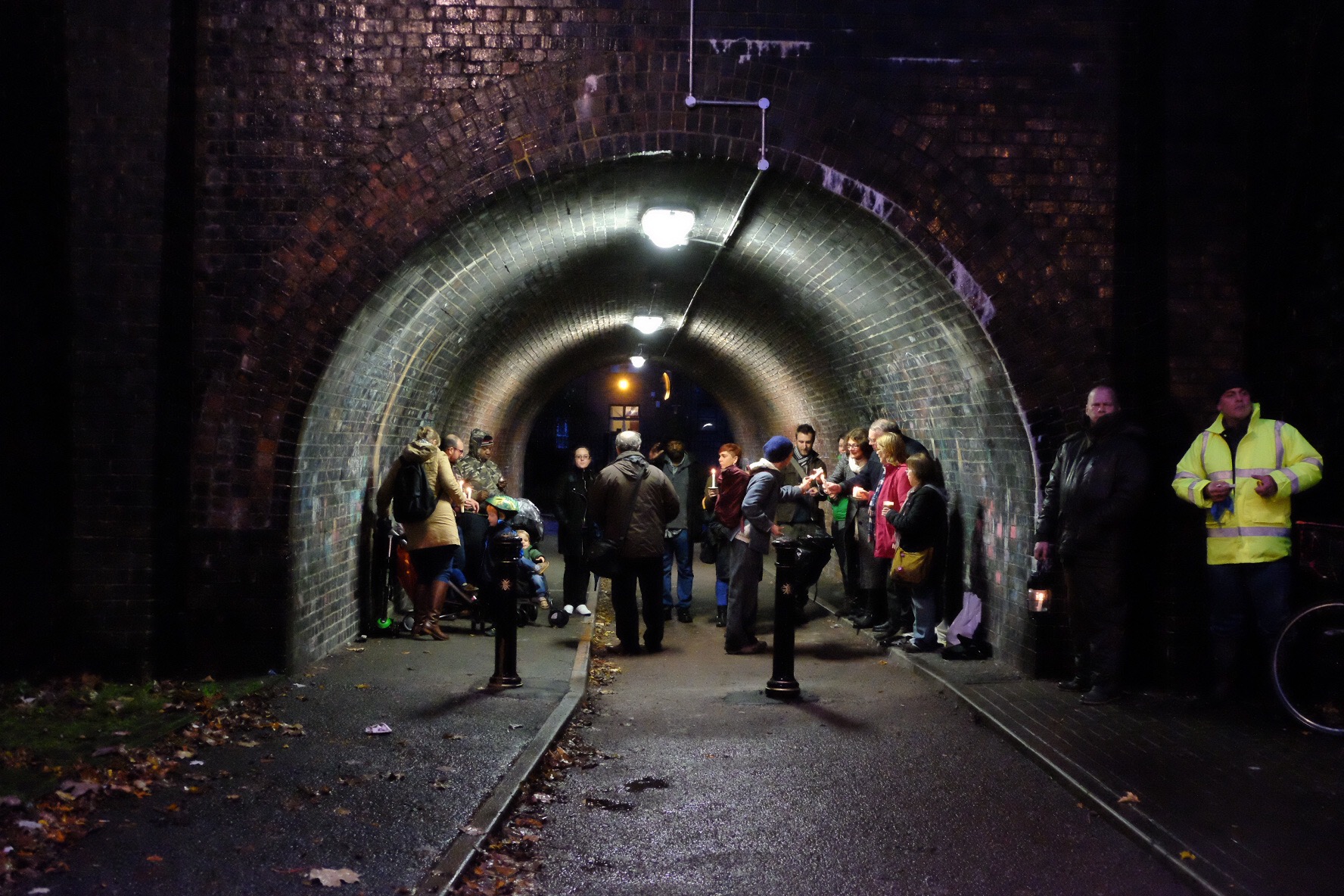 There are plans to set up a Levenshulme branch of the Women’s Institute. If you are interestd then come along to the Klondyke on Tusday 17th November 2015 at 19.15 to find out about this ion and aims of the WI and see what interest there is locally. There is a suggested donation of £2 to cover costs and refreshments.

Find out more about the Women’s Institute HERE.

Day of the Dead Ofrenda at Bankley Mill Studios 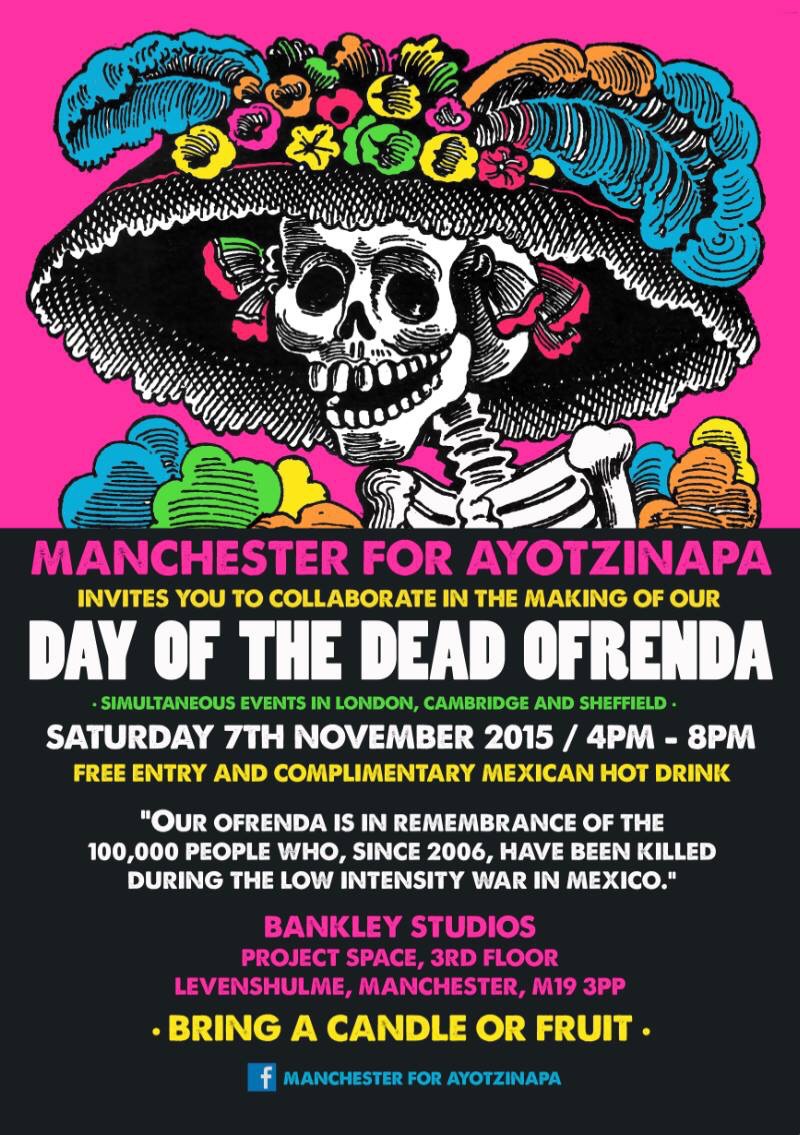 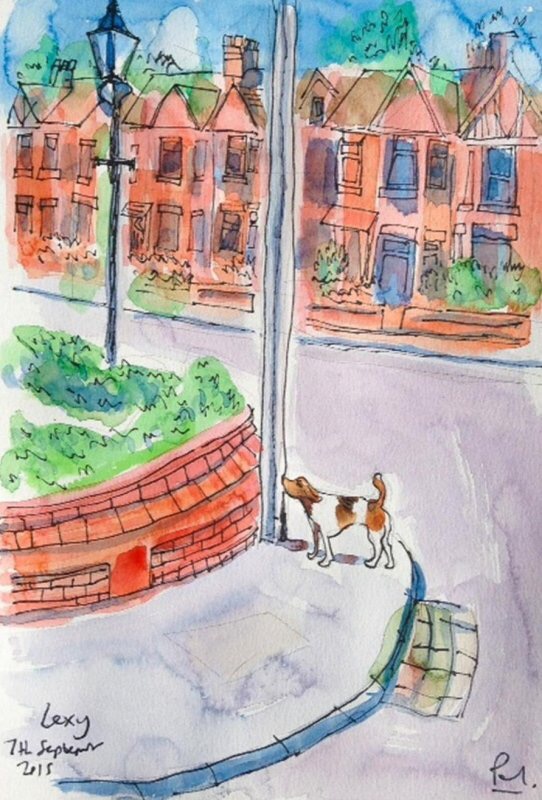 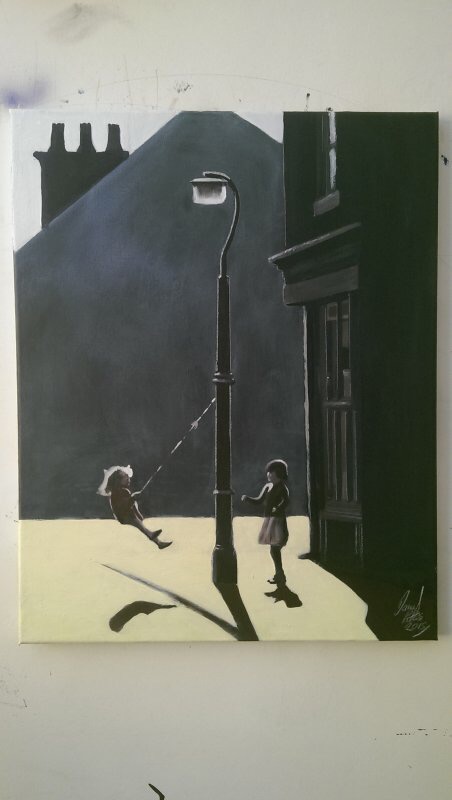 Grants are available from Manchester City Council to celebrate International Women’s Day 2016 for events and activities held in March 2016.

The application form and guidance is available HERE

The closing date for applications is Tuesday 17th November at 17.00.

The Breakfast In Bed project set up by Jamie Whittaker has been profiled in an article in the Guardian.

The best summary of this Levenshulme based project is this:

“…the power of community, of the kindness that occurs when ordinary people come together.”

Levenshulme people overcome adversity, support each other, fight for their community and reach out to others in many different ways.

“Jamie Whittaker started bringing breakfast to homeless people on the streets of Manchester in January. “I had a week off work and I was walking from one train station to another. It was freezing, and there were 10 [homeless] people. They were all supposed to have been offered temporary accommodation because it is that cold, but it was all lies. They shouldn’t have been there.” So he took matters into his own hands.

As with many of the grassroots groups and projects that have sprung up under austerity, social media has played a huge role in the campaigning and organising. Whittaker, 35, who works shifts at a children’s home, started posting about the homelessness problem on the Facebook group Levy Massive, a community group for local people in Levenshume. He gained donations and volunteers as a result. Breakfast in Bed is not a charity and is not government-funded – local businesses and people have donated their time, labour, money and food to keep the project going. The project’s own Facebook group now has more than 800 members and new volunteers are joining all the time.” 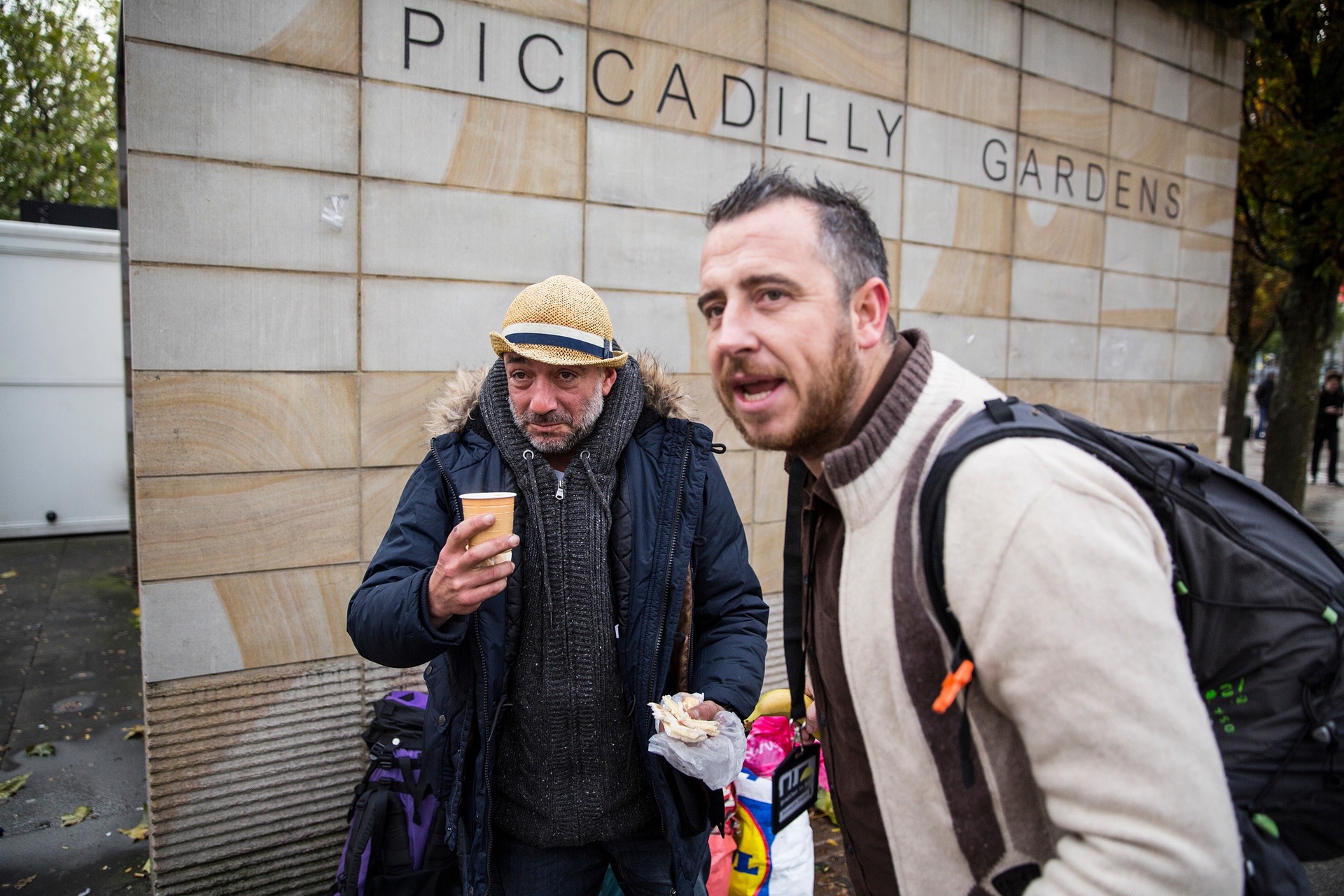 (Photograph: Christopher Thomond for the Guardian)

The article goes on to mention the involvement and support of the local community.

“…Whittaker is… keen to point out that the volunteers act as go-betweens for two, often conflicting sides. He says: “We reach people they don’t reach, people they don’t know are there, and who are trying to stay off the radar. People who have burnt bridges with the council … we hope that we’re able to rebuild those connections.” With more donations, he’s hoping that the group can start helping to house people as well. They already hold monthly “pop-up” events. This month, it’s the haircuts.

At Shine, a salon in Levenshume, the atmosphere is almost festive, thanks to the cheery manner of the staff and the Shepherd’s pie steaming in the corner. Soon all the chairs are full. Joanne is given a new, chic bob, while Dave, an alcoholic who has been homeless on and off for 15 years, gets a shave and a cut. At the back of the room another staff member rolls cigarettes almost as quickly as they are smoked. A staffie darts about in excitement. The event is a testament to the power of community, of the kindness that occurs when ordinary people come together. In its matter-of-fact Mancunian way, it’s very moving. Outside, where there are extra seats, people are eating. A man cries as his hair is cut. Others are worrying about the freezing temperatures to come, that groups such as this can’t ever fully breach the widening gaps in services.”

The Lovely Levy Colouring Book by Paul Magrs will be launched at Fred’s Ale House on Stockport Road this Saturday, 7th November, 12.00-16.00.

Paul will be in Fred’s on Saturday afternoon with copies of the Lovely Levy Colouring Book available for £9 each or two for £15. 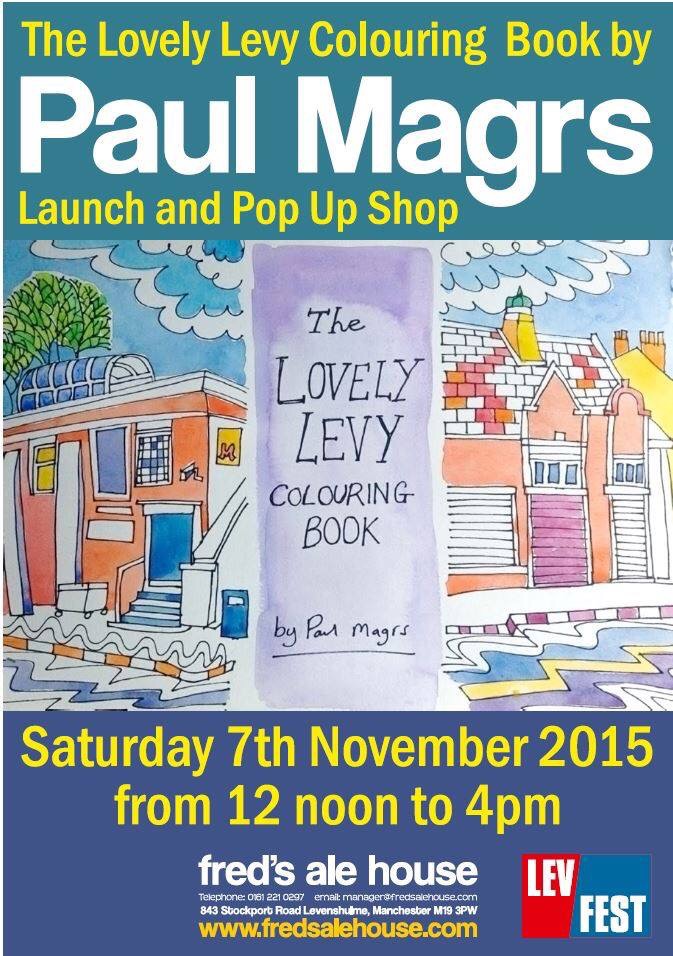 A few reasons to love Levenshulme by Becci Johnson in Timeout:

You could fill the whole magazine with reasons why Levenshulme is so great, though.