It is a little unfortunate the article advertises the fundraiser on Friday 29th in an article published on Saturday 30th but any coverage is very welcome.

Note also that there are a couple of factual errors in the article:

1 The new baths and library facility is scheduled to open in Spring 2016, not Autumn 2015.

2 Levenshulme High School never took over the building. The school simply rented the space to use for part of the week. Local campaigning was essential to ensure the library stayed open as a library until the new facilities open.

A public meeting is also scheduled for Tuesday 16th June, 19.00-21.00 at Levenshulme Inspire on Stockport Road. Further information and discussion is also available on a Facebook group at: 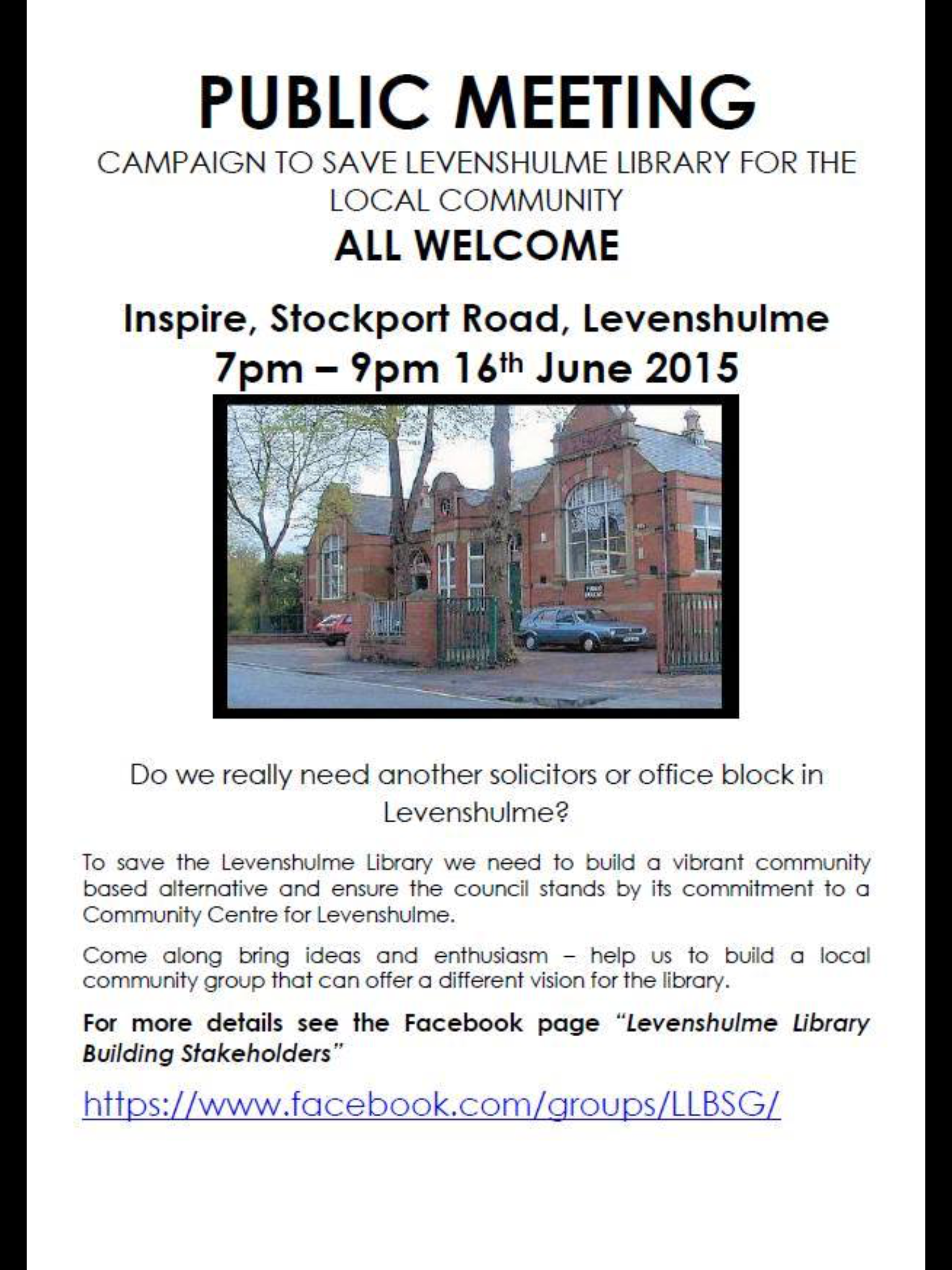 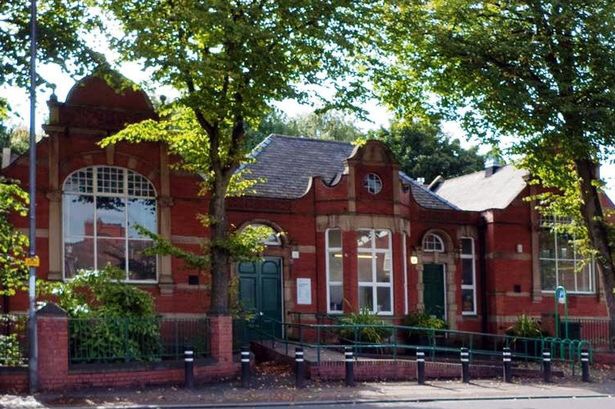 The fundraising party for Levenshulme Library is on right now at the Klondyke (1 Burnage Range of Albert Road). 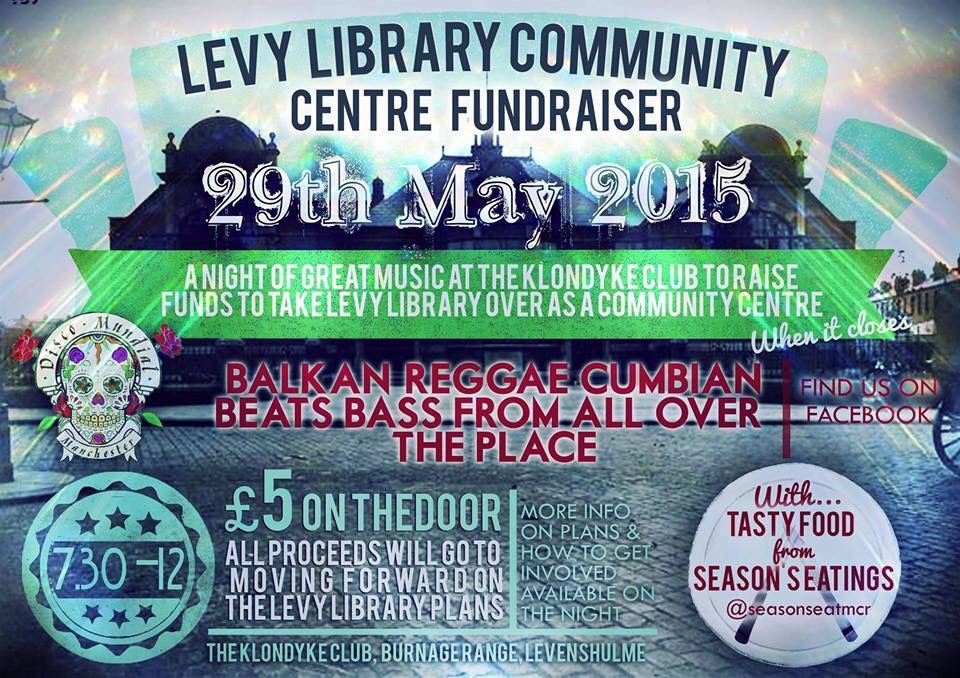 Following announcements of branch closures recently the Royal Bank of Scotland has confirmed that its Levenshulme branch will close this year.

Hard Rain Poetry will be meeting on Monday 24th May at Thairish Cafe (910 Stockport Road).

The Friends of Levenshulme Station Annual General Meeting will take place at 18.30 on Wednesday 20th May 2015 at Levenshulme Library.

This isn’t Levenshulme specific but here’s a report from a conference earlier this year. With an ageing population and social and health care increasingly reliant on family support the issues confronting people who do not have children as they get older can be daunting.

The conference, the first of its kind, aimed at people over 50 without children, aimed to:

Grab your parents and head to Levy Market this Saturday 23rd May, 12.00-14.00 for a free, fun kids decorating and planting session. You’ll find our planting tent in the midst of the action, where we’ll be decorating plant pots and planting climbing beans for you to take home and look after.

It’s the perfect way to start summer, with your very own climbing bean plant to grow – and it’ll give the grown-ups a quick 5 minutes to dash round the market. When your Levy beans start to grow, you can send us a pic – and the best ones might even make it onto our website!

All equipment is provided – just bring your enthusiasm and those green fingers!

Check it out on the Levy Market website HERE 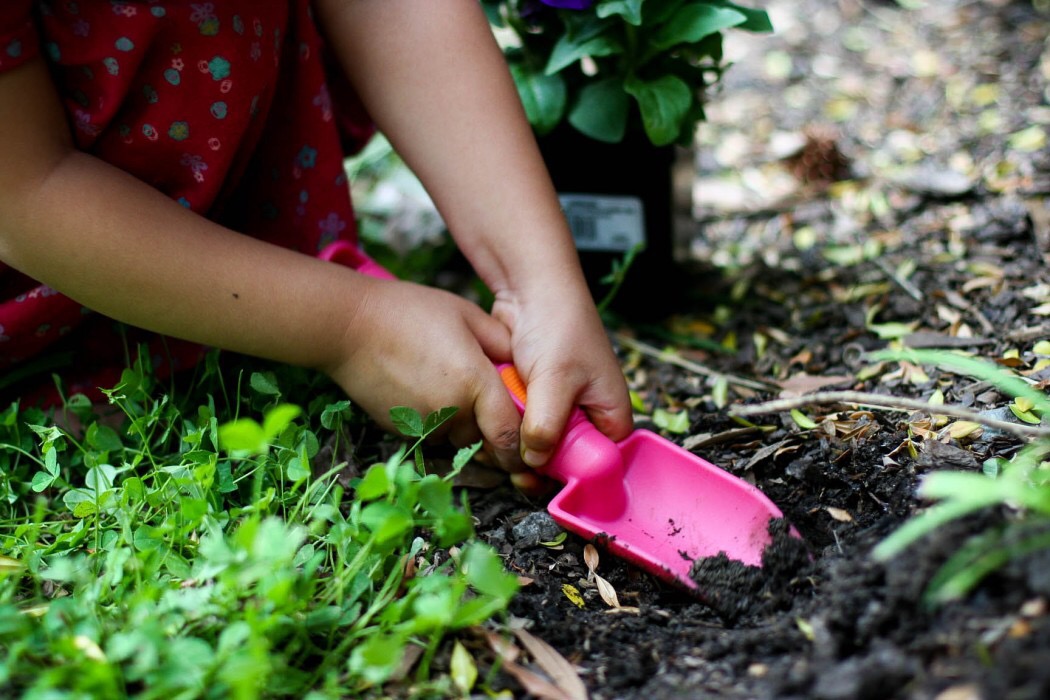 The wonderful Levenshulme Food and Drink Festival is almost here. Running from 12th – 21st June and now in in third year Levy Fadfest is a highlight of the year.

Organised by folk who love, live, work and revel in Levenshulme. Fadfest is a celebration of all things delicious and tasty from field to fork/glass!

Local residents, businesses, organisations, groups come together to create an exciting programme of events held at different venues around the area.

A new Neighbourhood Planning Forum is being proposed for Levenshulme. This is a community group that develops a Neighbourhood Plan for our area that would identify our priorities and key concerns regarding planning and development in our area.

It is hoped that as many people as possible get involved in the Levenshulme Neighbourhood Forum. To help achieve this aim an Information Evening will be held as follows:

Anyone who lives or works in Levenshulme is welcome to come along. There will be experts from Locality who will make a short presentation outlining the process but the bulk of the evening will be for people to ask questions and find out what this is about and how Levenshulme can benefit.

An information leaflet and feedback form (see below) is being distributed that provides initial information and asks for your views. If you haven’t received one yet they are available at Inspire on Stockport Road and Levenshulme Library on Cromwell Grove.

You can download a PDF version of the leaflet HERE 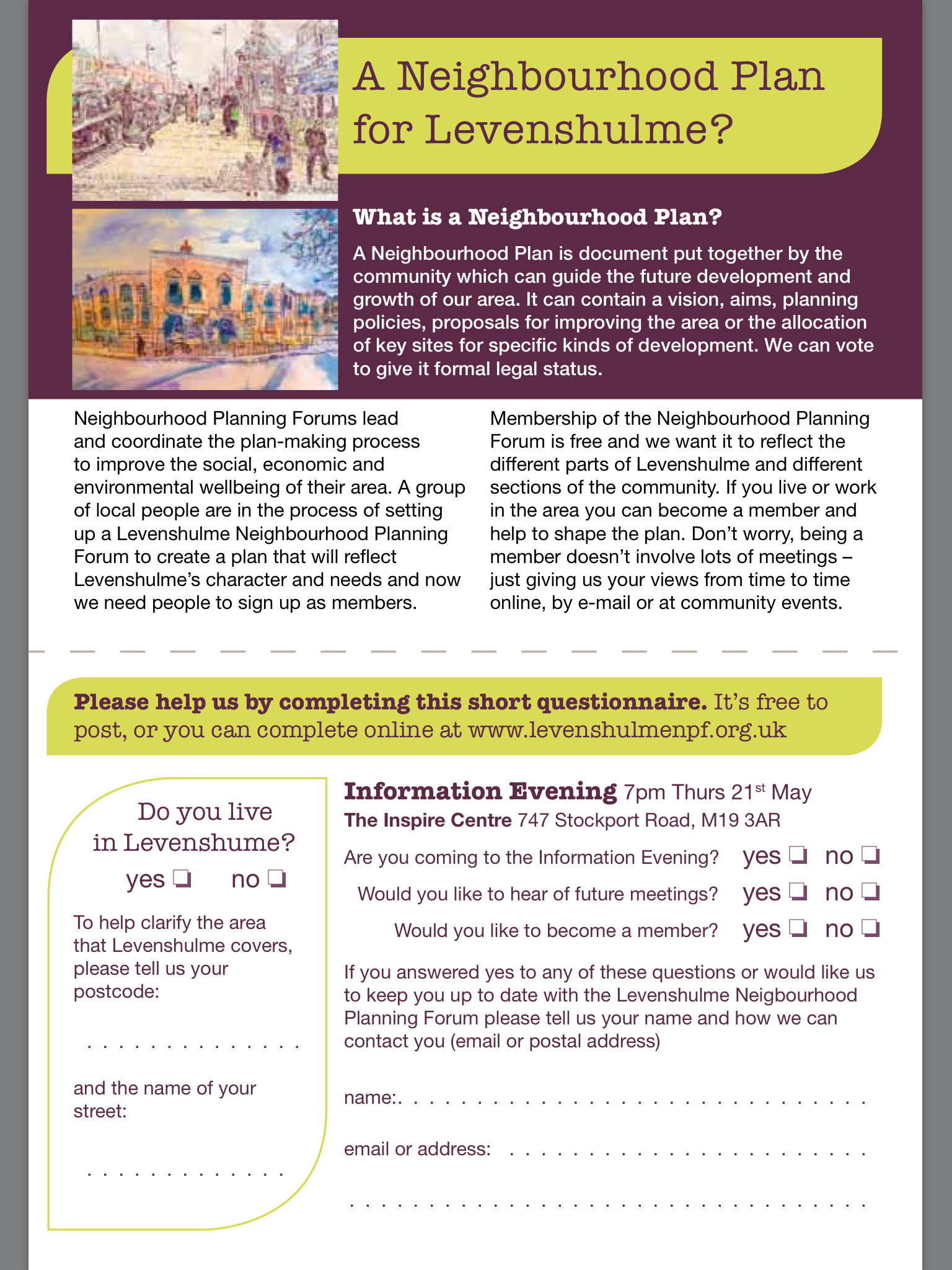 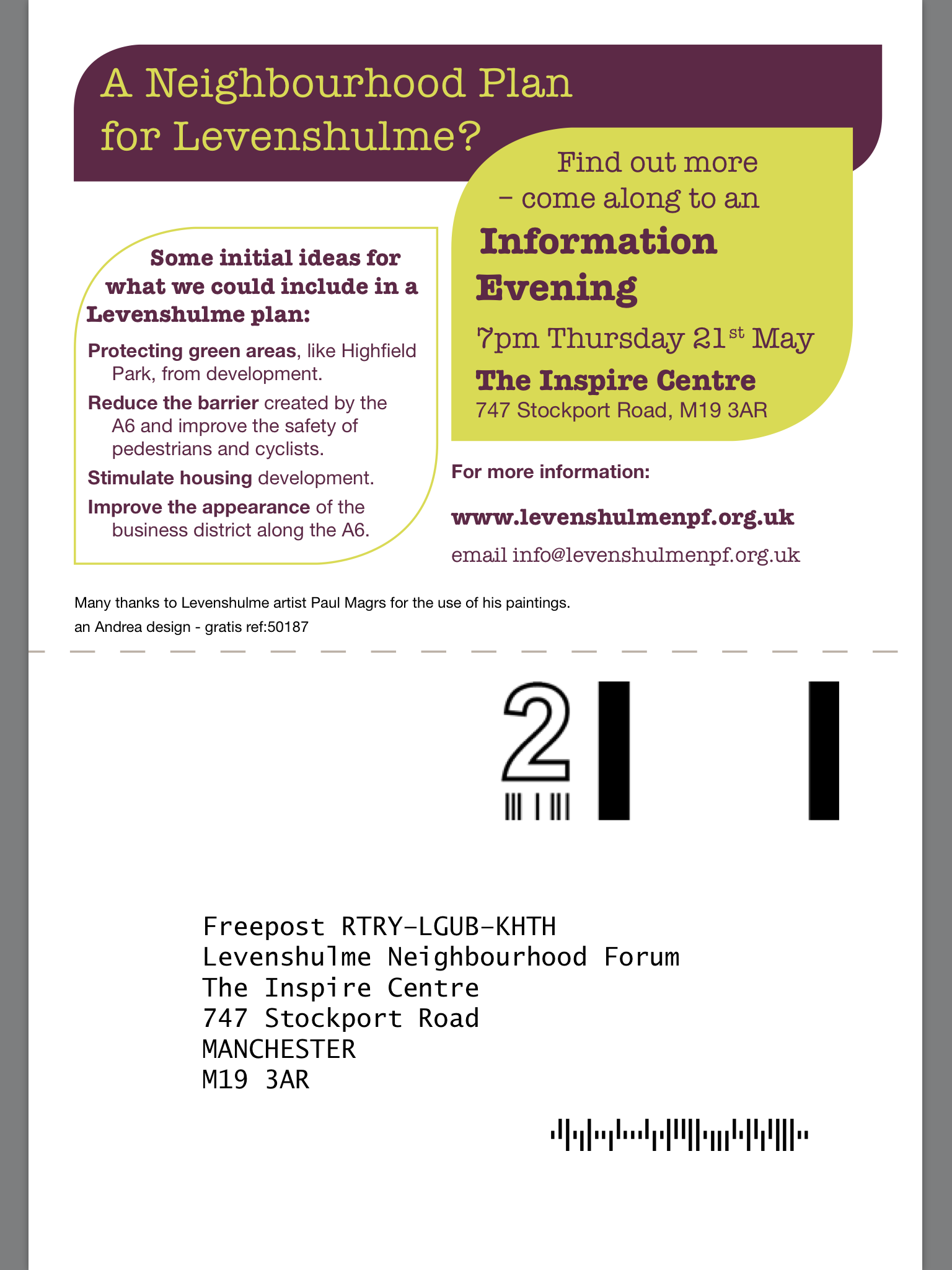 There will be a fundraiser to raise money and interest in the campaign to have Levenshulme Library converted into a community centre once the library service moves out next year.

Friday 29th May at the Klondyke club.
7.30-12pm.
Klondyke Club, Burnage range, Levenshulme (off Albert Road)
£5 entry… all proceeds to the campaign

There will also be a planning meeting to prepare on Wednesday 20th May at 7pm, also at the Klondyke…

Please come along, meet nice people who care about our community, have a good time and show your support. 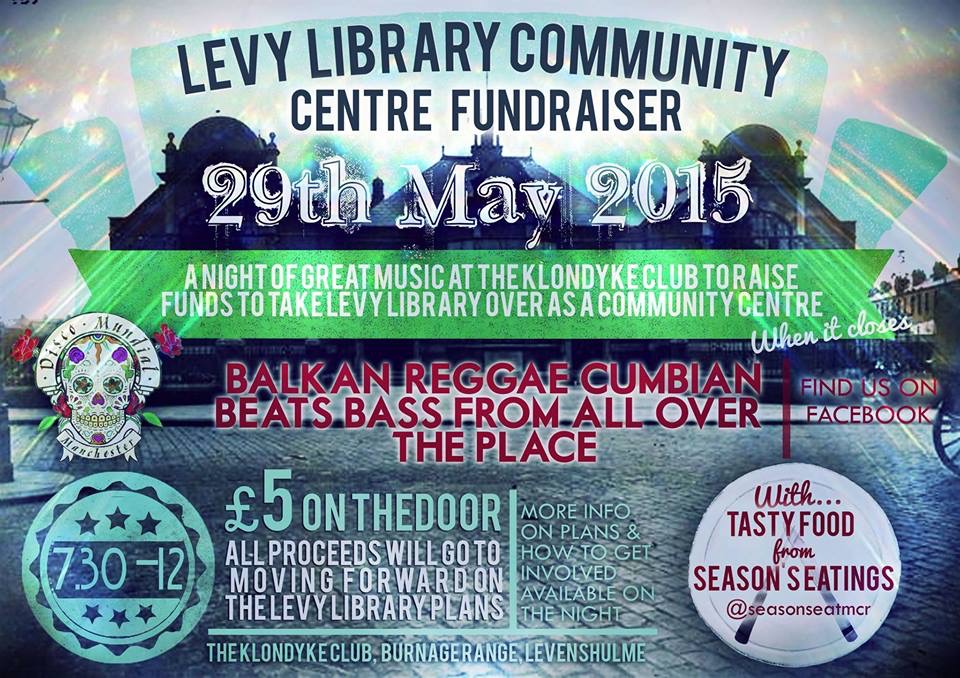 Mancunian Matters seems to have been impressed with Levenshulme’s councillors with mentions of both Basat Sheikh and Peter Cookson. It reported:

‘Basking in success over his first time win, Basat Mahmood Sheikh for Levenshulme said to one of his colleagues while the counts were being verified: “I have certainly proved myself”.’
and

‘The other side of Gorton also had a triumphant success, victor Peter Cookson said it was a ‘record breaking result’ after finding out he had 4564 votes.

UKIP failed to provide competition for Mr Cookson, with an uninspiring 966 votes for second place.

At the end of his winner’s speech, he added: “It’s an unbelievable result in the history of this seat”.’

The Friends of Highfield Country Park will be meeting at 19.00 on Tuesday 12th May at the Baptist Church on Elmsworth Avenue.

Anyone who uses the park is welcome.

Don’t be put off by the headline – Time Out loves Levenshulme.

The “gritty” bit in th headline is actually a reference to the grit and determination of Levenshulme residents. Becci Johnson has certainly got that bit right.

Great new initiative by Madina Masjid and Community Centre. Our community working together in tough times.

The Lunch Club is open to anyone who might be experiencing social isolation, food poverty and other economic challenges. Nutritionally balanced cooked meals will be provided daily. People from all backgrounds and of any faith or none are welcome. 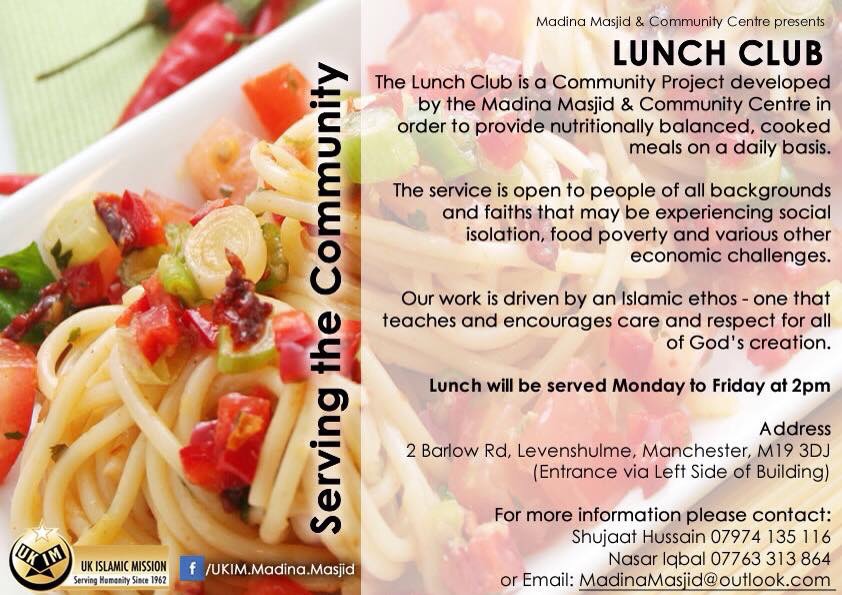 Here are the results for the 2015 elections in Levenshulme.

Local election results are given for both Levenshulme and Gorton South Wards as Levenshulme covers both wards.

Levenshulme falls in the national parliamentary constituency of Manchester Gorton.

Voting is only one day away now. You can find out where to vote and see a map by entering your postcode HERE.

These are the candidates standing in the 2015 local and national elections.

Both Levenshulme and Gorton South are listed for the local elections because Levenshulme is covered by both wards and the Levenshulme ward alone does not include all of Levenshulme. You can find out which ward you are in for council elections HERE.

Levenshulme Community Association is an apolitical organisation. Any mention of candidates or elected representatives by the LCA is for information purposes and should not be taken to imply an endorsement of any individual or political party.

Programmes are £5 (free for under 16s accompanied by an adult) available from Bud Garden Centre, Inspire Cafe, Chorlton Bookshop. 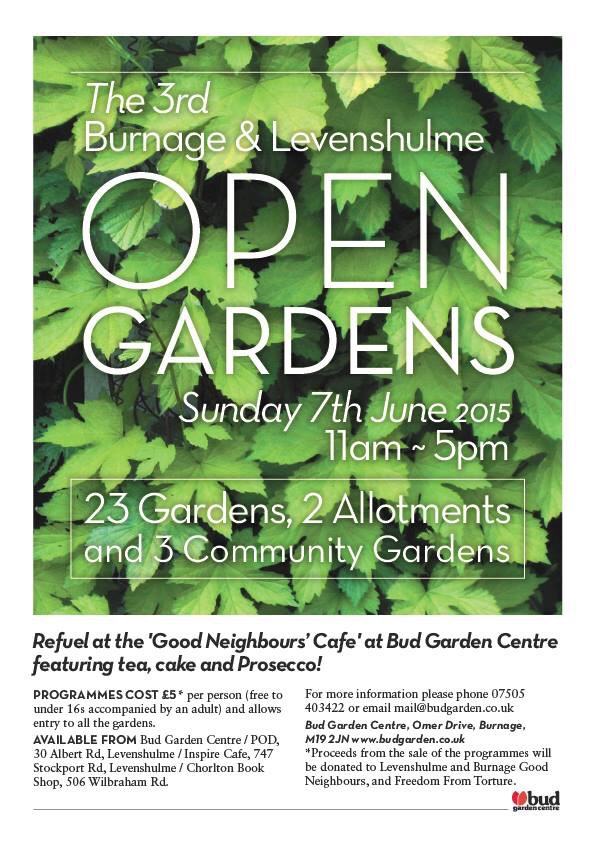